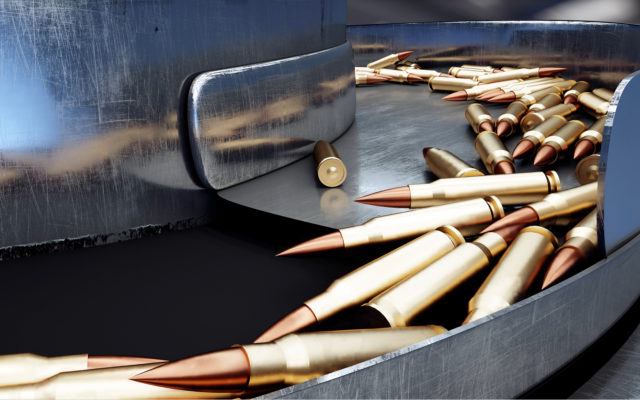 Soyuzmash, the Union of Machine Builders in Russia, has asked the Central Bank for permission to accept Bitcoin and stablecoin payments for weapons deals. This, they claim, will help them to circumvent US and international sanctions.

A Difficult Environment For Selling Weapons

Soyuzmash Vice President, Vladimir Gutenev, told the advisory council on military-technical co-operation, that current conditions were tough. The environment is not a competitive one, due to strong sanctions pressure. Payments for weapons which have already been delivered could be delayed for months, and transactions are increasingly difficult.

However, Soyuzmash, backed by the State Duma defence commission, believes that allowing Bitcoin payments could alleviate some of the issues.

The problem with this, of course, is that Russia’s Central Bank has been very vocal in not wanting to legalise Bitcoin.

One of the key issues many authorities have with Bitcoin is its alleged use for purchasing illegal items on the dark web. So the illegality of Bitcoin in Russia preventing state-backed companies making morally questionable arms deals seems rather ironic.

Apparently, Gutenev has discussed the matter personally with Central Bank Chief, Elvira Nabiullina. Failing Bitcoin, Gutenev also proposed using a stablecoin if the Central Bank was more amenable to this. Nabiullina is currently considering the suggestions.

Russia is the second largest exporter of weapons worldwide, commanding 21% of the market, following the USA with 36%.

A recent report suggested that countries such as Russia, China, Iran, and Venezuela may already have long-term cryptocurrency strategies, to avoid US sanctions and Dollar hegemony.

Meanwhile, it seems that the Russian Duma is still divided over a coherent policy for cryptocurrency regulation. This, despite an intervention and 1st July deadline set by President Putin.

Previous suggestions of a crypto-ruble launch have been put on indefinite hold, and legislators now seem willing to simply watch how cryptocurrency plays out in other countries before putting any plans into action.

However, there was a call to rush through mining regulations, as energy providers were sitting on a surplus of supply. This could be provided to miners so that Russia did not fall behind other nations.

Do you think Russia will lift the Bitcoin ban to help it’s nation’s weapon manufacturers? Let us know your thoughts in the comment section below!