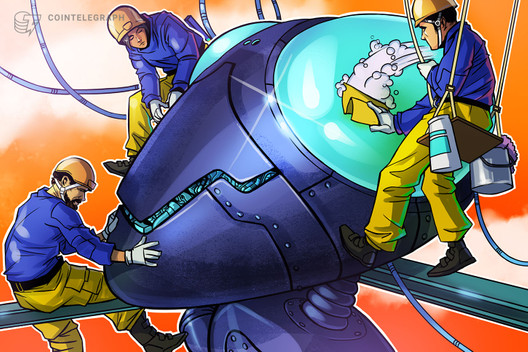 With the e-hryvnia pilot testing successfully over, the Ukrainian government is making a concerted effort to engage in the crypto-adoption race.

At a press conference held on Feb. 21, a representative for the National Bank of Ukraine released the results of its much-hyped central bank digital currency project called the e-hryvnia. However, the banking institution is still not certain of the impact this financial offering will have on the country’s overall financial stability as well as on its local banking market.

An official statement released by the NBU clearly states that if a massive chunk of the Ukranian population were to switch to this ambitious digital currency, the nation’s banking ecosystem “may cease to be a major financial intermediary.”

Not only that, the NBU also believes that the release of such an offering will potentially strengthen the confidence of the masses toward Ukraine’s traditional finance ecosystem as well as its various monetary offerings. The statement further reads:

“In addition, the digital currency can help reduce the amount of paper money in circulation. For many countries, this is an urgent task, since the shadow economy is often ‘fed’ with paper money.”

So, it does appear as though the e-hryvnia project is not a top priority for the NBU right now, since the bank’s governor Jacob Smol recently tweeted that even though the CBDC’s pilot project has been executed successfully, the matter will only be looked into again when the technological feasibility of the project can be fully verified.

With that out there, it seems as though Ukraine’s crypto ecosystem is still going through a period of metamorphosis, especially since the government seems to be in favor of using various novel decentralized technologies. Therefore, to gain a better understanding of how popular digital currencies actually are in the region, Cointelegraph reached out to Evgen Verzun, a Ukrainian crypto expert who is also the founder of Hypersphere AI — a decentralized cyber-secure network and computation platform. Verzun pointed out:

“Cryptocurrency use is extremely widespread in Ukraine and the current government understands that this growing industry can jump-start the economy as successfully as it did with the IT sector. Even the president of Ukraine participated in a round table with crypto-leaders recently, deciding on how to develop the crypto space and protect the rights of market players.”

With Ukraine seemingly pushing for more crypto innovation across its finance sector, it bears mentioning that on Feb. 20, local cryptocurrency exchange Kuna released a stablecoin called UAX. This new asset has been built atop the Ethereum network and will have its value pegged to the hryvnia on a 1:1 ratio. As things stand, UAX is currently in its beta testing phase and will be under trial until March 20, 2020.

Ukraine’s economy has been on the receiving end of heavy financial turmoil over the past decade or so. This is in part due to Russia’s alleged aggression against the Eastern-European powerhouse that started back in 2014. Elaborating on the country’s dwindling economic condition, IMF representative Gosta Ljungman pointed out that Ukraine is one of just 18 nations to have witnessed a reduction in its economic growth between 1990 and 2017 — showcasing an annual GDP depreciation of -0.2%.

With that being said, the aim of UAX will primarily be to help stabilize the market as well as introduce the masses to decentralized finance options that are not only easy to use but also auditable in nature.

It is expected that UAX will be released to the public by Michael Chobanian — the founder and CEO of Kuna — at BlockchainUa 2020 during the last week of March. Lastly, the stablecoin will be fully compatible with major Ethereum token standards such as ERC-20/ERC-865 and will be auditable using a method known as proof-of-reserve — a protocol that helps facilitate independent, cryptographically-verified audits.

At the moment, the proof-of-reserve scheme is being employed by a number of popular crypto exchanges such as United States-based Kraken to ensure that its customer funds are backed by verifiable reserves.

As things stand, Ukraine does not have a solid regulatory framework for governing the digital assets held by its citizens. Therefore, to govern a stablecoin such as UAX, Kuna will be making use of its very own governance infrastructure until a legal process is established that can help clarify the government’s position in regards to stablecoins (and other such offerings).

Additionally, the Ukrainian government passed the final draft of its money laundering law some time back — based on the guidelines put forth by the FATF — designed to address a host of pressing economic matters, including how virtual assets and digital currency operators should be regulated. In this regard, Konstantin Yarmolenko, the head of Blockchain4Ukraine — an organization seeking to streamline local government and business processes through the use of blockchain — was quoted as saying that Ukraine’s virtual asset-related law number 2179 will most likely be enforced by April 28, 2020.

The new law includes a number of guidelines regarding how the government will monitor and regulate the trading of cryptocurrencies. For example, one of the guidelines says that the government will only collect a limited amount of information (such as the sender’s public key) for transactions worth less than 30,000 hryvnias ($1,300).

On the subject of Ukraine trying to gain an edge within the global crypto arena, Igor Pertsiya, advisor to Ukraine’s Ministry of Digital Transformation and partner at tech startup investment firm TAVentures, told Cointelegraph that like any progressive government, Ukraine is also trying to lead innovation when it comes to blockchain and crypto:

“I see many startups in Ukraine that are developing and growing within the global crypto sphere. It is no coincidence that there are a huge number of technical institutes in Ukraine — 23,000 students of technical specialties graduate each year, thus helping in the influx of new talent into this space. Take Bitfury, CEX.io, GHASH.io for example, all of these projects have Ukrainian DNA associated with them.”

Lastly, over the course of the past few months, Ukraine seems to be actively exploring the digital currency and blockchain space. For example, the Finance Minister of Ukraine stated a few months back that the State Financial Monitoring Service of Ukraine will soon be tracking the movement of its citizens’ crypto holdings — that is, the origin of the funds as well as their final destination.

Crypto mining in Ukraine all set to boom

Earlier in February, Ukraine’s Ministry of Digital Transformation released a manifesto on digital assets clearly mentioning that the country’s mining sector does not fall under the administrative purview of any government body or regulatory agency. Instead, all mining-related activities can be regulated by members of the network as well as the protocol itself.

A spokesperson for the ministry also stated in the manifesto that it will help foster the development and implementation of decentralized technologies as well as establish sandboxes designed to evaluate their market potential and utility. If that wasn’t enough, the agency also promised to help bridge the gap between Ukraine’s traditional financial market and the digital currency sector by establishing healthy practices on crypto taxation.

Providing his insights on the matter, Verzun told Cointelegraph that owing to the unstable nature of Ukraine’s national currency, mining crypto for monetary gains has become an extremely popular economic avenue for the country’s youth:

The future looks good for crypto

The way things are, it seems as though a number of governments are waiting for China to release its much-hyped central bank digital currency — so as to analyze the pros and cons of such an offering as well as adapt the technology to the specific realities of their local landscapes. Thus, it is quite commendable that the Ukrainian e-hryvnia is already being tested with different DeFi solutions and will most likely be launched for mainstream use by the end of March.

If successful, the project could definitely simplify a host of operations related to the Ukrainian crypto and traditional finance sectors. And while platforms like Kuna may not become extremely popular due to established exchanges already staking their market share, the spread of UAX to other platforms may be a game-changer for the local digital currency market.

Speaking on how the future of crypto looks like in Ukraine, Veroslava Novosilnaya, CEO of SLOVA Tech PR — one of the largest tech-oriented PR firms in Ukraine — told Cointelegraph that, having been involved with the crypto market since 2015, he has witnessed a vast increase in the number of projects related to this space over the past few years:

“Before when I came to any crypto-startup office, I saw 10 people at max but now this number is in the hundreds. The level of industry has grown and in Ukraine specifically, it is also due to the fact that the government is not enforcing tight regulations but rather trying to negotiate with major players to give them an opportunity to develop and grow.”